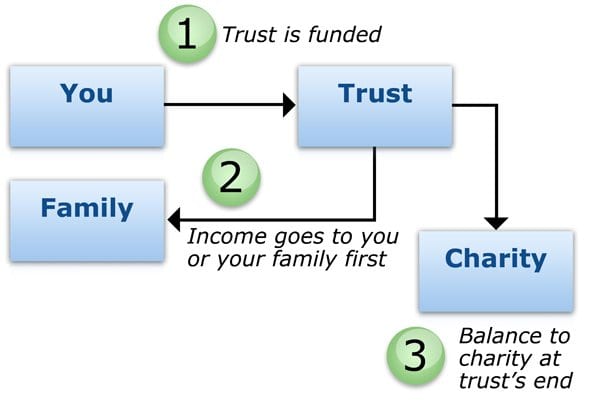 A charitable remainder unitrust (also called a CRUT) is an estate planning tool that provides income to a named beneficiary during the grantor’s life and then the remainder of the trust to a charitable cause. The donor or members of the donor’s family are usually the initial beneficiaries. The trust provides variable income to the beneficiary, which is based on a percentage of the fair market value of the assets in the trust. This amount is revalued each year.

A CRUT is usually funded with a valuable asset, such as artwork, a house, stocks, bonds, or other property. Additional assets can be added to the trust over time. So that the trust is not simply used to avoid taxes, the federal government requires that the charity receive at least 10% of the asset’s value.

Some of the benefits offered by charitable remainder unitrusts include:

Assume an individual, Mr. Smith, has $1 million of publicly traded stock and would like to establish a CRUT. Assume the CRUT is set up to pay the annuity to Mr. Smith over his lifetime. Mr. Smith selects a 10% CRUT. The CRUT will pay Mr. Smith 10% of its assets (initially $100,000) per year until Mr. Smith dies. At that time, any balance remaining in the CRUT will be distributed to charity. The term “unitrust” means the annuity percentage is fixed; the CRUT will distribute 10% of the value of the CRUT’s assets each year, the CRUT’s value may increase or decrease over time.

CRUTs are used for a variety of reasons. Often, CRUTs can be used to save income, gift, and/or estate tax. Because the CRUT is a tax-exempt entity a CRUT can be used to sell highly appreciated assets at greatly reduced tax consequences.

For example, assume Mr. Smith purchased publicly traded stock for $50,000.00. And that over time, the stock appreciates in value to $1 million. If he were to sell the stock, he would have a $950,000.00 capital gain for income tax purposes and would be subject to a substantial capital gains tax (this example will assume a combined federal and state capital gains tax rate of 20%, or $190,000.00 of capital gains tax). One tax planning idea would be for Mr. Smith to contribute the stock to a CRUT prior to the sale of the stock. The CRUT would then sell the stock. Assuming no other activity in the CRUT account, the $190,000.00 capital gains tax on the $950,000.00 gain would be paid over his lifetime (without the CRUT, Mr. Smith [taxpayer] would have to pay the $190,000.00 all at once). The taxpayer would receive an annuity from the CRUT based on the full $1 million of sales proceeds, rather than an annuity (or income stream) based on the $810,000.00 after-tax proceeds.

One possible concern for the taxpayer in the above situation is the risk of death shortly after setting up the CRUT. In such an instance, the CRUT proceeds would pay to charity before the taxpayer has received many benefits from the annuity. In addition, at the taxpayer’s death, the charity receives the assets that might have otherwise passed to children or other heirs. Because of this, tax planners often suggest that their clients purchase life insurance, to be held separately from the CRUT. Using life insurance mitigates the risk of early death.

For example, assume the same taxpayer above was to set up a CRUT and were to die quickly. In such an instance, the balance of the CRUT would pay to the charity. If tMr. Smith purchased a $1 million life insurance policy, in the event of his premature death, his family would receive the $1 million life insurance proceeds and the charity would receive the balance of the CRUT. With proper financial planning, the life insurance proceeds received by the family would be free from all income tax and estate tax.

A CRUT is a potentially attractive alternative to the purchase of an annuity. Quarterly or annual payments to the beneficiary behave like an annuity, but they have the additional advantage of the deduction from income at the time of the creation of the CRUT. The extent of this advantage depends on the current income of the person who creates the CRUT; if income is high, the tax advantage can be substantial.

What is a Charitable Remainder Annuity Trust (CRAT)?

The term of a CRAT may be for the lives of the named income beneficiaries or for a term of years, not to exceed 20 years. Additional contributions to a CRAT are prohibited. At the expiration of the CRAT’s term, the remaining assets of the trust, the “remainder”, are distributed to a qualified section 501(c)(3) charity. Because a CRAT’s fixed amount may not be changed once the trust is funded, it is best suited for older income beneficiaries for whom the loss of purchasing power over time is not an issue.

Question 1:  Do I have to set aside the money that is expected to go to charity?

Question 2:  What if the trust runs out of money or leaves less to charity due to poor investment performance? Do I lose my charitable deduction?

Answer:  The upfront deduction is based on hypothetical trust performance. The actual value of what goes to charity at the end of the income interest term does not affect the deduction. It is possible that the trustee of the trust could face liability if the loss in value is due to financial mismanagement, but there should be no impact on the upfront deduction.

Question 3:  I’m considering a CRT in which the income interest lasts only for my lifetime. What if I die early?

Answer:  It is possible to provide that the income stream must last a minimum of 20 years and that helps reduce the negative financial consequences of an early death. Alternatively, some taxpayers choose to purchase life insurance as a hedge against the financial risk of early death. If life insurance is an important component of the plan, it’s important to determine whether the taxpayer is insurable before assets are transferred to the CRT.

Question 4:  Can I name more than one charity?
Answer:  You can name as many charities as you like.

Question 5:  What if my favorite charity changes?
Answer:  You can reserve the right to change the charity or charities at any time.

Question 6:  I don’t need the income for my CRT until I retire. Is there any way to delay when those payments start?
Answer:  With CRUTs, but not with CRATs, it is possible to impose an income limitation on the CRUT such that it will only distribute its required unitrust payment when there is fiduciary accounting income within the CRUT. There are a variety of creative planning structures that can maximize the flexibility of income distributions using this concept, but those are outside the scope of this podcast.

In conclusion, CRTs can be a very effective tool for taxpayers planning to sell appreciated assets in a manner that allows them to defer income taxes while maximizing the tax efficiency of their charitable giving. DeHoek & Company has helped several clients with their estate planning, including CRUT’s, as a part of our tax and financial services.